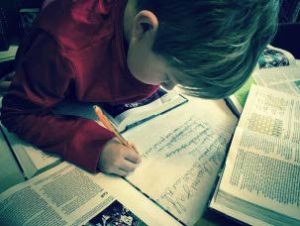 Maria Montessori built her style of education on her observations of children and on what she called the human tendencies. People had an internal drive to explore, work and imagine things that didn’t exist and then build them. The also had a need for order. She imagined the hunter-gatherers remembering where the delicious berries were, then working their way back to camp by incrementally memorizing important landmarks, so that they’d be able to find the berries again. It’s a sequence; a way to take certain steps to reach a specific goal.

This way of logical thinking was, and still is, important to us. In Montessori, from the very beginning when the children come into the prepared environment at 3, we work to satisfy the children’s inherent interest in order. The materials are laid out in sequence on the shelf. The teacher begins by going with the child to the shelf where the material is, having them take it and carry it to the place where they want to do the work. The child prepares the table with an underlay, or if they’re doing it on the floor, they lay down a rug. The lesson is given, the work is done, the area is cleaned up. You can see how many steps are involved. For the young ones each one is an important part of the work.

In the elementary, there’s a need for order, too, but it isn’t order in the physical space of the classroom. Instead the elementary child’s drive is to create order in the mind. They are given the freedom to pursue their interests. Let’s say they wanted to know about mining. The first step would be choosing to work along or with a friend, then they’d get the encyclopedia, read and then comes the real work — deciding what the most important information they read was, what to include and how to structure the essay. This is also a process with many steps. This need for mental order and developing logic and reason, as well as understanding the connections between phenomena is some of the most important work being done by the children in the 6-12 classroom.

Being Good at Doing Things